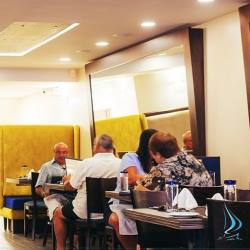 ALTAMAR a place with authentic homemade Italian food, warm inviting ambiance and a genuine friendly service that certainly will give each guest a unique and exceptional dining experien
Ratings

Jan 1, 2020 - posted by Terry Congelosi
We have been coming to Aruba for over 25 years now and have eaten at all the Italian restaurants on the island. Altamar Cucina is a step above all the rest! We were so impressed with all the elements of our meals, just delicious! We are so eager to go back and will be booking our reservation for January 2020! See you soon!
10.0
10.0
10.0
9.0
8.0
n/a

May 5, 2018 - posted by Nizar Perret-Gentil
We had the grilled octopus as an appetizer, it was room temperature and soggy. We ordered the seafood pasta as a main course and the pasta was hard and the shrimp was under cooked. We only took one bite out of the pasta and lost our appetite. At this point I just ask for the check, the waitress asked us if everything was ok, I said we didn’t like it and we would just like the check. The waitress left and then came back asking if we would like anything else that it would be free of charge, we said no thank you and she said that the pasta would be taken out of the bill (I wasn’t expecting them to do so), the manager (he seemed like a manager, he would go around and ask how the food was.) comes to the table very rudely and places the check in front of me firm, as if he were making a statement. The pasta was still in the bill.
Long story short, I wasn’t going to say anything or even go out of my way to rate this restaurant, but because of how rude I felt they were they deserve it. Horrible food and a bad treatment. I the service from
The waitresses was good, but the manager (or whatever he is) was bad. Presentation horrible. I don’t think it would be easy for a wheelchair to move around especially if the person has to go to the second floor, but I didn’t see if they have an elevator so I wouldn’t know.

Feb 11, 2018 - posted by Randy Vanderhoof
Dining at Altimar is always a highlight when we visit Aruba. We come each year for the salt-baked bronzino. The owner, Eduardo, personally filets each fish right at the table. He is a miestro with a spone and fork, delicately separating the skin and the skeleton to extract the delicate filets. When he is not fileting he is making sure ever dish is served perfectly. At the end of our dinner he walked outside and stood on the street to make sure we got into a cab back to our hotel. This is a must visit place when you are visiting Aruba.
10.0
10.0
8.0
8.0
n/a
n/a

Sep 18, 2017 - posted by Jean
Just had dinner here tonight and it was wonderful! Staff, food, everything was excellent.
We had 1 glass of wine, the eggplant and the carpaccio for appetizers. The pasta bolonese, and shrimp/ asparagus with pasta for our main dishes. No room for dessert! Bill was $90.
Great dining

Apr 26, 2017 - posted by Jean
We went here fir the first time in Sept 2016 and loved it!
From start to finish, it was excellant. Food and service was super.
Will certainly be back on our next trip!