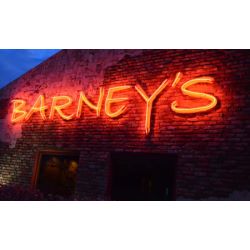 Sorry for the inconvenience.
Barney's is temporarily closed while they make updates to their current location.
(but might be closed forever)

Nov 16, 2014 - posted by Frank Difulvio
Barney's is a special spot to eat at if you like good food and a price that won't kill the budget.
The grouper was quite good, and the pork schnitelz covers your plate, if you order this take note you may not be able to finish it, three of the four of us could not .
Drinks, and beer are a great value also.
Good food and good prices well done Barney's
we'll be back next year

May 30, 2014 - posted by Darryl
Barney's was recommended to us by an acquaintance in the lobby of the Radisson. He was so pleased with the meal he had the night before that he suggested that we try Barney's. So...we cancelled our reservation at another spot and drove to Barney's ...on the Palm Beach Rd. in the same building where Pavarotti once was located. The surroundings are clean; the service friendly. There is a pianist providing nice, soft background music. Most importantly, the food! It was served hot; presentation was more than adequate. Barney's offers "specials...all you can eat" a few nights of the week. I had the ribs...a generous portion, well cooked. The meat came right off the bone with no trouble. Would definitely dine here again. Four and half stars!! :)
n/a
n/a
n/a
n/a
n/a
n/a

“Best Food and Price on the Island”

Apr 15, 2014 - posted by teresa thompson
My husband and I have been coming to Aruba for 16 years and have tried them all. This place was by far the best!!
The all you can eat ribs on Thursdays nights and Grouper night were the best. There is more food on the plate than we could eat not like a lot of other restaurants where you leave still hungry. The food was always hot and we never waited for a thing. The service was great and everyone made us feel at home. We will be sure to go back next year when we return. Another great thing is they are in walking distance from the Hotels so we did not need a cab. The prices are very low so we could go more than once a week.

Mar 31, 2014 - posted by Dan
Had ribs at Barneys last Thursday. Food was excellent as usual - we live in Aruba. Ribs are as good as anyplace on the island. We both also had potato soup which I have had many places here and Barney's is the best. If you are looking for a reasonably priced casual place a short distance off the strip, I highly recommend Barney's (though be aware I am just a regular diner, not a Food Critic like the poster below).
9.0
9.0
9.0
9.0
9.0
9.0

“Not quite what was expected”

Mar 29, 2014 - posted by Arturo
We were told (and read) about this "fun place" to dine...not quite! Piano player for "fun" (????)
However, the build-your-own-burgers are good, but can be overcooked.
Avoid the all-you-can-eat steak on Saturdays - the meat is extremely thin and therefore can only be cooked well-done, and it's seasoned with salt and then more salt!
Beer is cold, though, and the fries are tasty (all 7 of them)

“WE CAME, WE SAW - WE WERE NOT IMPRESSED”

Mar 27, 2014 - posted by FOOD CRITIC
We succumbed to the hype that has been going on for the past year or so concerning this place and were very much looking forward to a novel and rewarding dining experience here. Food here is generally good but not great and nothing really special. The place has an Early Bird special which seems to not be advertised and not distributed unless you either know about it or ask for it - so we hope that this mention might make some people aware of it. We did not know about it nor did they tell us. We saw it being offered to others who apparently either knew about it or asked. Why restaurants hide such things is beyond us if they are going to offer them and we find the practice to be a poor one (yes, others do it too). Another aspect a bit peculiar to this place is that it has special themes for certain nights - regrettably the themes are a bit deceptive. We went on a Wednesday (Grouper Night) and expected all grouper dishes to be offered as part of the deal - SURPRISE, guess what - only some of the grouper meals are offered as part of the meal even though you can order the remaining varieties separately. Fortunately there was little difference in price between the special offerings and the regular other offerings (which makes it more difficult to understand why they are all not included) so our take on their "special night" (with some exception) was to wonder why bother having them other than to entice people. Regardless, upon arriving, efforts were made to get us over to the bar and that is another practice that we find deplorable. Eventually we were seated and, after an interminable wait, received our menus and made our choices. Food was good and acceptable but nothing special and service was lacking - their au-gratin potatoes were extremely dry and almost inedible and had to be washed down. Desserts looked interesting so we figured that we were there and wanted to give the place a fair assessment so we ordered what appeared to be some of their more unique desserts. They included a Nutella Parfait (apologies to Ike's for having improperly criticized them for this dessert when, in fact, it was not offered by them or eaten there) which was mediocre at best and a profiterole which was exceptionally good and big enough for two to share (here was the Flintstone theme in action and what we were expecting of the rest of the place and which was not there). Aside from the profiterole, we really were not impressed with the place and failed to see what others see here. The physical layout is rather dark and somewhat unkempt, poorly lit, and unappealing. The place is undoubtedly a change of pace and we see where it could be appealing to some, nonetheless, we are reluctant to recommend it.

Feb 22, 2014 - posted by Diane Boutin
We just ate at Barney's and had great food, service and fun! The owner ,Eline is pleasant and talented! She makes a point to introduce herself and provide wonderful service! Her special salad was the best I,ve had in Aruba with goat cheese and a dressing that was divine! The ribs were better than anything on the strip ! And my husband had what he called "the perfect burger " with her "special sauce" . Instead of dessert I had a chocolate martini which was incredible! This is a great place !!!
10.0
10.0
9.0
9.0
8.0
10.0

Dec 4, 2013 - posted by BRKM
We finally tried Barney's for their burgers that we've been hearing about for a while. They were excellent. Overcooked, (ordered medium and they were all well-done) but still tasted great. Everyone had different toppings and we all thought our meals were great. We were a little skeptical when we got there, as it is a bar/restaurant and smelled a bit smoky. We sat at a table in the back and it was fine. But we went early and there was hardly anyone there yet. I think if it's really busy, the smoking could be an issue.
9.0
9.0
7.0
6.0
9.0
n/a
Showing reviews 11 - 20 of 73
Page 1Page 2Next
Write a review