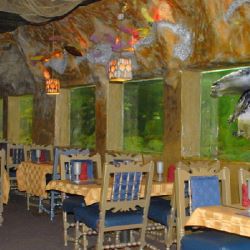 You may get the feeling you're dining below the deck of a sunken ship, as 12 large aquariums with colorful fish surround you. Our unique decor creates a warm and relaxed atmosphere. Our second dining room resembles an underwater cave, complete with a 5,000-gallon sea water tank, unseen elsewhere. Our friendly staff will give you the "Welcome Aboard" feeling and the chef-owner will personally take care of you.
Ratings

Jan 30, 2012 - posted by REJ
This restaurant was recommended by several locals, and I can only assume they get kickbacks for referring people there. The food is very dated -- stuck in the '80s -- and dead generic in every possible respect. The swordfish steak was low quality product, and when told this the waitress just said "oh" and took it away.

The taste was nothing to write home about. The waiters had a "patter" rather than a personality. The decor looks like something you'd have found in a chain restaurant in the 70s. It's dark, outdated, and really not worth the money. There are far better places to visit on Aruba.

Jan 19, 2012 - posted by Patricia
We have been going to Aruba for 23 years and because our friends think Buccaneer is great we went almost every year (much to my chagrin). After our last visit we have decided that we will not be wasting our money any more. Service is slow and the servers seem very confused as what to do. Food barely passable. The chef from way back is no longer there so maybe that is the issue
3.0
4.0
3.0
n/a
2.0
1.0

Jan 9, 2012 - posted by Dan R.
Knowing we were dining with a 7 year old, the hotel recommended this restaurant. Very child-friendly with the feeling of dining on an old pirate boat. The huge fish tank was cool, especially for my daughter.
The food was very good for a casual restaurant. Not a place we would rush back to, but definitely would recommend to someone dining with children.
8.0
10.0
9.0
8.0
10.0
n/a

Nov 23, 2011 - posted by Laura M
Wow... This was a restauarant that was recommended to us by people that we had met on the beach as well as locals. All I can say is wow. A throw back to the 80's. The decor has not been changed since it opened in 1980 and neither has the music. When we got there we felt like we were in a time warp.

The service was super slow... we sat for at least 10 minutes before someone even came over to us. Our server was ok, but absolutely nothing to write home about. The food was utterly disgusting. Everything was saturated in butter, I mean literally dripping in it. Then the vegetables (cabbage.. yum - NOT!) were dripping in greasy butter and cheese sauce. I ordered the "special fish of the day" it was SUPPOSED to be Mahi Mahi... um, yeah, I've had Mahi Mahi and it certainly didn't look like that!!! It was also completely overcooked and dry, which is surprising with all the butter that they had w/ everything else! My friend both had the NY Sirloin and it was disgusting. None of us finished out meals because the food was just that bad.

All I can say is thank god that we had gotten a gift certificate for $100 from La Cabana for doing the time share thing.. because if we had had to pay for that meal we would have been SO UPSET!

We were so disgusted with the meal, that it actually became comical at just HOW bad it was. It has definitely become the worst meal and restaurant that my husband, friends and I have ever eaten at.

We ended up going to Passions later to get some Key Lime Pie to get the horrible flavor, blinding of the eyes from the awful decor, and just awful experience...

Just dont go here. This was the worst meal ever and just horrible!

Jun 18, 2011 - posted by Steve & Kim
Our first trip to aruba on our honeymoon and the Buccaneer was recommended by a coworker. What a disappointment. Slow service, it took 5 minutes to get a menu. Food was nothing special and crowded together on the plate causing unwanted mixing of flavors. 15 % service charge already added to bill made servers lazy. Delayed more when their printer didn't work, good thing I had some cash I might still be there. Found out later the cook left and went to Wacky Wahoo's years ago. If you want seafood go there.
3.0
2.0
5.0
6.0
n/a
n/a

May 10, 2011 - posted by lovearuba
I've been going to Aruba for over 23 years. I do not miss this restaurant ever. It's my first visit. It's old school and classic. What other chefs do you know that comes out to each table to greet each single guest? Not allot huh. SO that says allot of this place.
The food is "island/arubian". Catch of the day is always recommended at this and other "island" restaurants. You want steak, go to a steak house.
All you "new yorkers" who have a "fine" pallet, you are the reason to have put all these classic destinations out of business, how shameful........ Love the Buccaneer :)

May 9, 2011 - posted by T
We were told that the Buccaneer was a must-stop while here in Aruba by our cab driver and other tourists who have much experience on the island. It's confusing for us, because our experience was not at all the same. Needless to say we were very disappointed with many aspects of the restaurant. The atmosphere is unique (with trinkets hanger hanging on the walls and an aquarium at every table) but we immediately found out that the service was less than expected- our waiter barely acknowledged our presence, let alone any of our needs. Then again it was confusing as to who our waiter was; we thought it was the first guy who served us, but two other workers shared the remainder of the effort (serving the food, clearing plates, filling water, etc.). The fish tank next to our table was filthy- there was a dead fish being picked at by the others, and the algae build-up was pretty disgusting. We had to use our menus to cover-up the nasty scene. We even considered leaving, but thought we would hold it out and try the food.

The house wine was terrible and the beer selection very limited. And then comes the food: it sucked. The poached sword fish was over-done and lacked flavor. The stuffed shrimp (said to be stuffed with crab meat) was bad and the stuffing did not taste or look like crab meat. The pasta primavera was served with a salty red sauce that was unexpected as the menu said it came with a white sauce. The fettucini with seafood was awful. The menu told me it includes crab meat, fish, mussels, and calamari, but I'm not sure what exactly was included in my meal. There was barely any pasta, but it was all cut way too short. Too much sauce. Almost 100% sure that the crab meat was fake- it tasted so, and had a gelatin texture. The calamari tasted similar. The interesting thing is that the cab driver who brought us home said that his favorite food was the chicken, and the Buccaeer is known for being a seafood restaurant.

All in all, NOT RECOMMENDED. Don't believe the hype, there are much better options for seafood.

Sep 25, 2010 - posted by J
Worst dinner ever
The lobster bisque was horrendous; it resembled porridge more than soup. The shrimp cocktail skimpy and the lettuce wilted. The swordfish might as well have been replaced by cardboard. And whatever you do, do not order the Chardonnay.
Though the atmosphere follows the theme of the restaurant well, closer inspection leaves one wanting the check. Dead fish in the fish tanks, cobwebs on the lamps, the view through the tank to a personnel area better left hidden.
The servers were kind and attentive, but we had to ask for the specials ourselves and got a second plate of bread twice.
With so many delicious and quality restaurants to choose from, we will never return to this one and would not recommend it to anyone we know, or don’t know for that matter.
2.0
4.0
2.0
3.0
n/a
n/a

Is "Buccaneer" your restaurant? - Manage your listing - Online Marketing Tools