Opening Hours:
Open nightly for dinner from 5:30pm to 11pm
The Lounge Midnight Grill from 11pm to 6am
Happy Hour 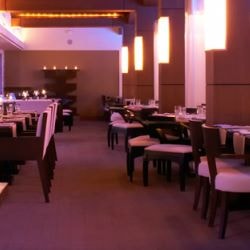 Located Downtown next to the Crystal Casino, featuring Certified Angus Beef and an extensive international wine list, the restaurant offers a contemporary setting with sweeping views of the marina and the bustling boulevard below.
Ratings

Mar 29, 2014 - posted by Arturo
We read their advertisement that they were celebrating their 10th anniversary and were offering "buy one entrée for $40 and the second is $10" - sounds like a good promotion, doesn't it?
What their ad doesn't say is "order from special birthday menu", which is limited.
So were the portions - perhaps they were meant for 10-year-olds?
Disappointing....
However, the restaurant is elegant and service impeccable!
But, it's not in the same category as Ruth's Chris..

“Great for Vegetarians too!”

Oct 6, 2013 - posted by Susie
We ate at Smith's twice during a one week stay at the Renaissance Hotel. We started with the Grilled Portobello appetizer, excellent. For entree, I had to try the rarely found Vegetable Wellington. The pastry was baked just right with a nice amount of vegetables and a very tasty light sauce. My husband tried the Goat Cheese Ravioli. We planned to go back and try different vegetarian entrees. However, both of us liked the first one we tried so much that we just couldn't switch so ended up ordering the same things the second time.
10.0
9.0
10.0
9.0
n/a
n/a

Apr 23, 2013 - posted by Nathan
Vacationed to Aruba and ate L.G. Smith's twice in the week we stayed. I had filet mignon both times and it was absolutely the best steak I have ever had. I've tried for the past couple years to find steaks that compare to the one's at L.G. Smith's, but nothing has even come close. The service was great, the atmosphere was calm and relaxing. Definitely 10 out of 10.
10.0
10.0
10.0
10.0
n/a
n/a

Nov 12, 2012 - posted by LECLAIRE
if my pork chop was any dryer you could have used it as soles for my shoes when i complained QUOTE" THAT IS THE WAY WE COOK PORK" I TOLD THEM THAT IS DID NOT KNOW THAT IS WAS PORK SINCE I COULD NOT CUT IT WITH A KNIFE WE PAID $78 FOR WHAT THEY CONSIDERED AN EATABLE PORK CHOP
1.0
7.0
6.0
6.0
n/a
n/a

Jan 8, 2012 - posted by sam and kate
A really nice and elegant restaurant, but me and my wife got there and there we had to wait a lot before we got our server. the water had some soap i think and i was like shamed to say something about it. when our waitress came and we she said as a joke "sorry about the lateness I wich we were like wendy's". she wasn't our friend or family to just start doing jokes. we had a great dinner well but what a disapointment.just for this we can't recomend this place.
1.0
1.0
1.0
1.0
1.0
1.0

Dec 9, 2011 - posted by Alisa
We went with a disabled child and were told that we could not bring any food other than what was on the menu for him to eat----needless to say we paid the bill immediately, did not eat our food, and left.....Just thought you all should know how child friendly this restaurant was----
2.0
1.0
8.0
n/a
1.0
n/a

Oct 25, 2011 - posted by Selmar
This is truly the best restaurant on the island. We went to other highly recoomended restaurants but LG's beats them all! We enjoyed the lobster bisque and the huge T-Bone!! Waiter ricardo was great, he made us feel welcome and special.

Last but not least: we were surprised by the very affordable prices at this restaurant...the steaks range from $22 - $32, which is nothing compared to other retaurants in the same category, On top of that: everything is certified angus beef...WOW!

Would reccommend this to everybody!