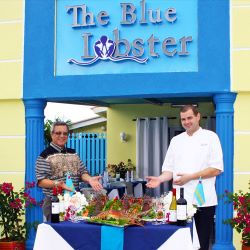 The formula for success at the Blue Lobster relies heavily on family ties, on cross-generational relationships between young and old, delivering work experience and the latest technology with one single goal of making THE BLUE LOBSTER RESTAURANT your preferred dining destination on the island of Aruba.

Our fish is brought in fresh, daily, hooked by local fishermen. We also receive fresh Caribbean lobster and shrimp every day, to guarantee the best taste possible.

Don't just let others tell you about The Blue Lobster, come in and taste for yourself!

Oct 7, 2014 - posted by Aruba Girl
There were 7 in our party. All the lobster tails were dried out and overcooked. Remainder of food was edible. All ordered from the special $38.50 three course lobster meal and we all felt the meal was not worth the money. They also charge a 5% service restaurant charge. When we asked what this was, we were told it was money for the restaurant to cover costs. Have never encountered that in my 30 plus years of coming to ARuba. Would not recommend. There are so many GREAT restaurants on Aruba and this is not one of them. Our entire group stated that they would NOT go back nor would we recommend.
4.0
7.0
7.0
7.0
n/a
1.0

Jun 5, 2013 - posted by Rita
We decided to try the Blue Lobster for the first time. It turned out to be a great choice. The night we went they had a special that included a free bottle of wine. We ordered Grouper and Mahi Mahi with mussels both were very good. The onion soup was just average but the salad was very good. Fairly new restaurant definitely worth a try.
9.0
9.0
9.0
8.0
n/a
n/a

“So Glad We Tried This Restaurant!”

Jan 31, 2013 - posted by George L.
This was our first time at The Blue Lobster, but definitely will not be our last! We dined there on 1/26/2013' and it just happened that there was a special menu available - 3 courses for $36. I had lobster bisque and my wife had lobster ravioli for appetizers and we each had the 8 oz broiled lobster tail and everything was delicious! Dessert was crime brűlée which was very good as well. Service was as good as can be and the chef/owner came out to introduce himself and get our feedback. He was genuinely interested and that was wonderful. The presentation of each course was absolutely beautiful! We were definitely impressed and look forward to dining there again soon!
8.0
10.0
10.0
8.0
n/a
n/a

Jun 13, 2012 - posted by Peter A
We were really looking forward to a lobster meal. They had a specials menu which showed a lobster for $45.00 versus $25.00 on the regular menu. My wife ordered the $45.00 one. We asked to see the lobster prior to it being cooked. The lobster was presented coated with lots of ice, but we decided to proceed. We should have known better in that large lobster tails can be tough, which this one was. I ordered the pan fried grouper which was very good. When the bill was presented the lobster was shown as $115.00. I complained and the owner stated that the server should have told us about the price, which he didn't. The server repeatedly referred to the specials menu. The compromise was that the owner gave us a $20.00 discount. Although the atmosphere was cozy which promoted talking to other patrons. Most of the patrons were from the Marriott resort. My advice is "buyer beware". I would never recommend or go back again to the restaurant.
4.0
4.0
8.0
9.0
9.0
9.0

Feb 21, 2012 - posted by Bob and Deb
We have been coming to Aruba for 15 years and have found many great restaurants, this was not one of them. We were a party of 4 and all 4 meals were awful. The Spicy Lobster was too spicy to eat. The Lobster Ravioli was swimming in oil and totally tasteless. The pasta with lobster had "supposed" chunks of lobster that were dried out. We had to ask for water 3 times. Many of the wines on the wine list were not available. We overheard someone ask about the price of the whole lobster, the waiter had to check if they even had a whole lobster.
2.0
2.0
3.0
3.0
n/a
n/a

Is "The Blue Lobster" your restaurant? - Manage your listing - Online Marketing Tools