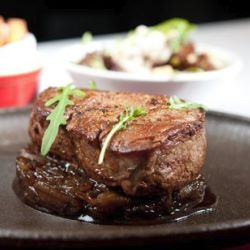 White is peace and balance. A restaurant where you can enjoy the harmony between food and wine. Where quality and flavor are brought to you in its purest form. There's no rush, just sit back and relax. Let us take you on a new culinary journey in Aruba.
Ratings

Jul 8, 2014 - posted by NYC foodie
My family has been vacationing in the beautiful Aruba twice a year for the past 9 years. We were so appalled by the the lack of service in this restaurant, that I felt compelled to write a review. First of all, when we walked into the restaurant, it was uncomfortably warm there. When we asked to crank up the ac a little, the waiter told us the airconditioning was not working properly. As the restaurant is inside the mall, there is no option to sit outside. The menu selection is somewhat limited. They only offer one choice of soup - creamy corn chowder. My daughter ordered the soup and to be fair - the presentation was great, but for her and my taste it was way too sweet. Our family of five ordered five main courses - 4 black groupers and 1 steak basket. I ordered 3 extra home made potato fries to be brought out with our main courses. After waiting for over an hour for our food to arrive, the waiter told that they have to inform us about a minor inconvenience - the restaurant is very busy tonight and they can't spare any many potatoes for us because other customers might order the one dish on the menu (The Steak Basket) that comes with potatoes. I was shocked, the restaurant was not even half full, and when I asked the waiter how many side dishes they can bring us, he told me none. For the restaurant that is trying so hard (but not nearly close to succeeding) to cultivate an upscale, fancy, gourmet image - their lack of customer service is an embarrassment. Spend your money somewhere else - there are plenty of other places in Aruba with superb food and outstanding service.
5.0
1.0
10.0
1.0
5.0
n/a

Mar 20, 2014 - posted by Jim
Reservations via their web site are super efficient. Staff is very friendly, service was great and food was superb. Presentation was exceptional, the food on our plates looked almost to good to eat.
10.0
10.0
10.0
10.0
n/a
n/a

Sep 7, 2013 - posted by Henri en Suzanne
Great food with great presentation. We've been to a lot of great places in Aruba but this is definitely up there with the best. Great dishes with many different ingredients and many tastes that actually compliment each other. There is room for service to improve but the food makes up for it. Portions are quite large for European standards but smallish for American.


We've thoroughly enjoyed our dinner and will return in the future.

“Out of this world”

Jul 2, 2013 - posted by Guille
Living in Aruba since 2005, I've been quite intriguied by this place since its opening. Finally, June 28th was the day. My wife and I were greeted by a nice host who checked our reservation and sat us in a table close to the kitchen. The waiter, Nathan, was very discreet and accomodating, doing his best. He even tried to get a work associate to check on us in Spanish. Unfortunately she chose the worst moment as we were beginning to go through our main courses. Word of advice, always ask customers how's everything if they're through already.
The food is amazingly inventive, stunningly presented and surprisingly tasty. Forget your diet!.
The drinks are literally out of this world. You must have "el habanero" and be blown out of yout chair by the bartender's skills and the drink itself.
All in one, a pricy place, but worths every red penny.
A must repeat!!!!

Mar 18, 2013 - posted by FOOD CRITIC
WHITE opened the day after we left ARUBA last year and we were disappointed that we were unable to visit it then because it did open to a great deal of fanfare and expectation. During the course of the year, reviews seemed to continue to be quite positive and the menu looked quite appetizing - so we were very much looking forward to going. We try to be open minded and fair in our assessments and we looked very hard to see what others claimed to have seen in this place but, after all the effort, we were unable to see it and our visit turned into one of the worst dining experiences we have ever had in ARUBA. There is no question but that the CHEF is talented and probably would be a viable contestant on any number of FOOD NETWORK shows but for the fact that he does not know how to cook. We specifically asked for a table to see the Chef at work and noticed that he was impeccable in his performance and plating and produced some of the most beautiful plates that we have ever seen in ARUBA but they were tasteless. One appetizer came with a foam topping that wilted in the ARUBA heat and had some beignets (SP?) that were hard as rocks, the other was fatty pieces of meat nicely seared but without spicing and difficult to eat. The Entrees were embarrassments - the fish dish was little more than crispy fish skin and the meat, though perfectly grilled, was totally unseasoned and tastelessly served with a bowl of Barbecue Sauce! For the price, we could have eaten at almost any other place in ARUBA and had a much more enjoyable meal and experience. If you are into culinary art, plating, presentation, and stuff like that then this is the place to go to but if you are out to get a reasonable meal it is not. We suggest that if you are into plating, etc. that you simply watch it on The Food Network and if you are interested in a good meal that you go someplace else. The food here is terrible and the price for it is excessive. Go someplace else and have a good meal at a far better price. THIS PLACE , IN OUR OPINION, IS NOTHING SHORT OF A CULINARY ABOMINATION - AVOID IT LIKE THE PLAGUE! YOU CAN DO FAR BETTER ELSEWHERE.

Mar 11, 2013 - posted by Ontario
We were very disapointed with our experiance. The atmosphere and decor were awesome, but the food was average at best. The service is what did us in. It was terrible. He hardly spoke to us and acted as if he did not want to be there. He needs to find another job, not dealing with the public. Very over rated.
6.0
3.0
10.0
9.0
n/a
n/a

We were planning on going to White Modern after reading all the great reviews, but what made it special is that DW
won a contest for a $100 gift certificate from Aruba Table. As the name of the place suggests, most of the restaurant
is decorated in white. DW had the red snapper, which came with soba noodles and oriental vegetables in a little pot.
I had the steak basket, which was a filet mignon atop a bed of caramelized onions, and came with a basket of french fries and a mixed green salad. The waiter that greeted us said we were going to get the best table where you could watch the staff assembling the dishes using their weapons - tweezers & scissors. It was fun to watch how the team works so efficiently in preparing the meals. Total amount for the 2 dinners, 2 drinks, a bottle of Pinot Noir, one espresso, and tip came to $142.23 - less the $100 coupon = $42.23. DW says this place has the "wow" factor & I agree.

Service and food was spot on. Had the pleasure of being seated by the windows where the chiefs plate the food. Truly spectacular in their food presentation. Artists for sure.

Wife had the steak. Was plated very nice and was delicious.

I had the red snapper. It was wonderful.

We would definitely dine here again on our next visit to Aruba.