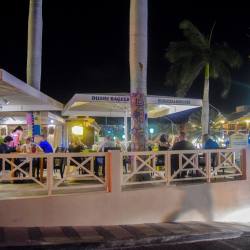 Dushi Bagels & Burgers is a family owned and operated restaurant. We moved from Argentina in the year 2000 following a dream: Open a successful food & beverage business, have quality family time and enjoy this small paradise island called Aruba. Back then, the family was much smaller, while today we proudly added a new generation!
Ratings

Aug 13, 2021 - posted by Desiree Falls
My boyfriend and I had breakfast here this morning. The food and drinks were good. Service was a little slower than it has been at any other places we’ve gone too but kind of expected while here. While we were eating, one of the ceiling fans fell from the ceiling and one of the “blades” hit my boyfriend on the head (they weren’t wood or metal blades like we have at home, they’re more of a lightweight material) but still had enough weight to them that it wouldn’t be your choice to be hit with one. Thankfully he wasn’t seriously hurt or cut when the glass from it shattered everywhere. If he had been a few inches over or had sat one seat over, which is where they had originally put the menu but he decided to move before even sitting down, he would’ve been seriously hurt or even knocked out from it. Not that this was their fault, however, I think they should have turned the other fans off and at some point VERY soon they should have them inspected to see if they’re sturdy enough to be hanging and turned on. Also, we aren’t the type of people who expect anything for free but after this happening, I think it was the manager who brought our bill over to be paid. I thought the least they could’ve done was given us the meals “on the house.” Several customers came over to be sure he was okay and one was even shocked they gave us the bill after that happening. Glass was shattered everywhere and I told the girl cleaning up that there was several pieces she missed but she still didn’t clean it up so I’m hoping no one walks in barefoot as I’ve seen some people do there. We certainly won’t be going here again and hopefully anyone else who goes won’t walk or sit under the other ceiling fans still hanging that don’t look to be in the best condition.
6.0
3.0
n/a
1.0
n/a
n/a

“My favorite spot on the island!”

Nov 19, 2020 - posted by Rachel
This is hands down my favorite spot on the island- incredible breakfast, coffee, atmosphere to sit and enjoy before the beach. Amazing dinner, with entertainment, ample outdoor seating and drinks! The people who own this restaurant are dedicated to doing things the right way, and embody so much of what I love about Aruba! We miss you Dushi staff!
10.0
10.0
10.0
10.0
10.0
n/a

“I have been a client since day one”