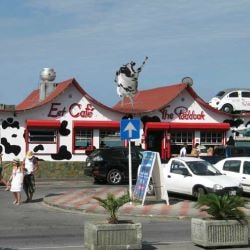 Eetcafe The Paddock, located right next to the fruit market and the harbor is the only genuine Dutch bar on Aruba. In Holland we call it an 'Eetcafe' meaning that you can enjoy different popular platters each day in a friendly atmosphere as you savor your favorite beverage.
Ratings

“The most rude waiter has ever met”

Oct 29, 2019 - posted by Leda Come
This is my second time in Aruba and I want to say this. I never , ever been in the place with the worse waiter ever, maybe he is the owner , who knows? The food was horrible . Maybe they need to see Roberto from Coco plum restaurant and learn how to treat your clients . I feel very sad to say that but Aruba has change a lot since I came here two years ago. To sad to say but I don’t think I will come back here ever again.
1.0
1.0
1.0
1.0
1.0
n/a

“Our first time after visiting Aruba for so ma”

Sep 11, 2016 - posted by Don Sien
We have been coming to Aruba for over 25 years and have not eaten at Paddock ever! Well, Aruba has started charging for parking everywhere in Oranjestaad (2 florins for 2 hours) and we found a spot near the Paddock so we decided to try them for a quick light lunch. The location is nice right by the water and the service very friendly. The prices and specials are also very good and reasonable for Aruba...they have an ayce ribs for $15pp on Saturday evenings...one of the lowest price for ayce ribs. However, we have not tried them yet. Today, I had a bacon cheeseburger and Amy had a pineapple cheeseburger sans the cheese. Both were fresh and very good, seasoned and cooked just right. They just came with lettuce, onions and tomato. Sides were a la carte. Service was also attentive, friendly and very good. It looks like we've discover another new place to eat!
9.0
9.0
8.0
9.0
8.0
n/a

“Bad food at a high price”

“funky place on the harbor”

Aug 10, 2012 - posted by Dan
My wife and I own a house in Aruba and spend a lot of time on the island. We stop at the Paddock for lunch occasionally or drinks in the afternoon and we have had dinner there a couple times. The Paddock is a funky, old bar-restaurant that sits right on the harbor. It has some outdoor tables that face the harbor so you can watch charter fishing boats and cruise ships come and go and planes approaching the airport while you are eating. Given the type of place it is, the food is very good and very reasonably priced. We usually sit at the bar and service there is great. Note that every cruise ship docked can mean up to 3000 more people in town so the service staff can be extremely busy.
8.0
6.0
n/a
8.0
n/a
8.0

Jun 20, 2012 - posted by Tom G
This was quite possibly the worst dining experience that I have ever had in my life.
I'm 52 and can not remember any time I was so very unhappy with a restaurant.
My wife ordered the fish soup and when she got it it looked like it was canned tomato soup with a few pieces of fish in it. The taste was NASTY. The only time we saw our waitress was like 15 minutes after we were seated and then again just before we received our check. They had birds flying all around the restaurant landing on tables and the place was dirty. The hamburger I had was very dry and on a huge bun so you didn't even know you had meat inside it.
WOULD NOT RECOMMEND THIS PLACE TO ANYONE!!!!!!!!

Feb 9, 2012 - posted by CJ
This has to be the worst dining experience I have had in Aruba. Wait staff were very unconcerned. When someone in my party asked to please have someone take our order, she said " we are very busy!" Food was over cooked and possibly the vegetables were canned. I have heard about how good the burgers are but we were told we couldn't order them because they were not able to cook ribs and burgers at the same time. What????? Anyway, don't waste your time and certainly not your money. I am not sure how they are still in business.
1.0
1.0
1.0
1.0
n/a
n/a

Feb 7, 2012 - posted by Tom
Our party of four visited this restaurant for lunch. First the drink order was wrong. Then after a long wait only three meal were brought to the table. One was completely forgotten and had to re-ordered at that time. No apology was given. The orders that were received included cold French fries. I asked the waitress to replace them and she did not seemed pleased!! Being an open air restaurant pigeons were all around. There was a notice asking patrons not to feed the birds. However a piece of food fell on the floor and the waitress immediately came over to sweep it up. She told us please don't feed the birds in an accusatory manner. When we told her it fell - we did not feed she started to argue with us. How inappropriate!! The gents restroom was disgusting!! Do not patronize this restaurant. It was awful!!
1.0
1.0
1.0
1.0
n/a
n/a

Feb 5, 2012 - posted by Rob
Rude,Rude,Rude service. This was my fifth and final time eating at The Paddock. Looking at the restaurant from the outside it has a fun, quirky atmosphere but it was far from a fun place last Wednesday night( Rib Night). I have eaten here each time I visit Aruba, even though the service was marginal, but this time it reached a new low. It was crowded and apparent that they were short staffed. We were patient, placed orders and received food relatively fast, food was okay but servers all had an almost hateful attitude.

Aruba may be one happy island but the Paddock is not a happy restaurant.

Nov 9, 2011 - posted by Kawika
Well, I was disappointed. My new wife and I are exploring the less expensive restaurants on Aruba, and therefore the All You Can Eat Ribs for $13 deal was super exciting; that is, until we went. ALSO: there was a "free souvenir drink with purchase of a meal" coupon in a guidebook, so I thought "sweet! A free drink too!"
When we arrived it was a beautiful setting: dusk was fast falling, the seating area was half-full, and the waiters looks young and friendly. Well, when we got there we stood next to the stand where there is normally a host/hostess, and no one helped us. Then a waiter walked back behind the podium and looked at me and smiled, to which I told him there were just two of us and I asked where we should sit, and he said "wherever you want". So I chose a table on the pier, on the sand just overlooking the water (gorgeous!). But then there we sat for over 10 minutes. Waiters walked behind us, next to the tables near us, and entirely ignored us. Then a waiter saw me and sort of waved. I thought "great, we can get drinks or finally be treated like paying customers". Finally my bride said that I should go talk to a waiter and see if we can get menus/service/anything. The young waiter was very apologetic when he realized we were being ignored. That was good. Then a different server came up to us and took our orders and all that. Finally. Btw, the ribs were big, juicy, and generally good. Some were overly dry, but my first plate (I had two plates) was really good. Overall the service was really poor and that just made the experience so much lower than it could have been. As an aside, she had the Grouper salad, and it was bland, and this is coming from a girl who generally appreciates bland food.
And about that free drink? They said they were ALL OUT of the "souvenir drink" so I didnt get it. Being an American who is used to customers being valued I expected them to you know, replace the "Sourvenir Drink" with, oh, gee, one soda? a free beer? whatever? But, no. No honoring the coupon. All in all, not the best place.

Is "Eetcafe The Paddock" your restaurant? - Manage your listing - Online Marketing Tools