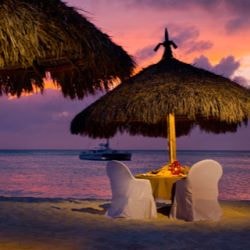 The sound of the waves breaking, the sweet smell of the Caribbean Sea, a starlit sky, and great tasting food.

If you are experiencing this right now, then you must be dining at "Foot Prints Beach Grill", the newest addition to your fine dining experience at Hyatt Regency Aruba Resort and Casino.

Specialized in grilled fare, Foot Prints Beach Grill on Hyatt Beach is a great place to start your evening casually. Depending on the time you choose to have dinner, you may be treated to one of the most beautiful sunsets in the world.

Foot Prints…Visit us and leave yours behind!

“Heaven with a fantastic sunset and food”

Apr 12, 2013 - posted by Ann
Just came back from Aruba today...4/12/13. We went on a recommendation to the restaurant. Had to say this was the ultimate experience for my husband and I celebrating our 35th wedding anniversay.

A breathtaking sunset AND our own little "ocean front" table. A lantern lit our table and our mood as the food came and was absolutely delicious. Waitstaff was right on top of their game anticipating our needs.

We didn't stay at the Hyatt, and paid a bit to park our car for our dinner. But, we truly had a wonderful night and wonder memories for our anniversary.

Was looking for a very romantic place to have a sunset dinner and had noticed this restaurant in front of our hotel the night before. Looked amazing so we booked it for the next night. The next night a wedding with a DJ was playing literally 10 feet from our "romantic" table. No sound of anything except loud rap music. Had to yell to hear each other. Complained to the hostess who basically shrugged her shoulders and apologized. Awful experience for a $170 dinner.

If you eat here, make sure to ask if a wedding reception will be going on at the same time. Wrote a formal complaint to Hyatt and have yet to hear a response...

Mar 15, 2010 - posted by june
This was the most disappointing meal on our trip. We love the Hyatt and thought the dinner would be consistant. It was awful. All the food was pre-made and looked/tasted "old". Vegetables were soggy and had been frozen. They tasted like water. The meat was left over from the buffet. Just re heated. Dessert was some dumb left over birthday cake. The bill was very expensive. Do not go!!
2.0
8.0
3.0
9.0
n/a
n/a

Sep 11, 2009 - posted by AVScheppe
We chose to dine at Foot Prints because we were staying at the Hyatt(highly recommend!) and we wanted to have a nice dinner in a romantic setting. The menu is limited but the food was AWESOME! The black bean soup was delicious, ceviche was perfect with a lot of kick from the cilantro. I had the shrimp dinner and they were excellent! The dessert was top notch too. Mango Creme Brule and an amazing chocolate layer cake. Very romantic, excellent food, lots of privacy! When you want to dine alone, this is the place!
10.0
10.0
10.0
10.0
n/a
n/a

Jun 7, 2009 - posted by lori mc
Another great meal at footprints. the service was perfect and so was the food. The crab and corn chowder was delicious as usual. The grouper was great and so was dessert. I look forward to this meal each time i visit aruba. It certainly helps to have great friends (Bob and Karen) to enjoy such a great meal with.
10.0
10.0
10.0
10.0
n/a
n/a

Aug 12, 2008 - posted by AnS
We had dinner at Footprints the other night to celebrate our 10th anniversary. It was the most romantic dinner we had all week. the service was friendly although not extremely attentive (maybe they were giving us our space?)I had the fish ceviche, which was very good, a bit spicy for me, but good, and my husband had the salad, so we swapped. for the main course i had the mahi mahi, which was a bit dry, but had great flavor and my husband had the bbq ribs. dessert was by far, the best i had on the island. I had the pumpkin flan with the rum bananas. yummy!
toilets were in the hotel, obviously, so it was a bit of a walk to get there.but they were clean and very nice.
kid friendly, of course, the table next to us had several who felt it was easier to releave themselves in the ocean than to make the walk up to the hotel.
all in all, our most expensive dinner of the week, but it was our anniversary, why not! it was the best sunset all week long

Sep 17, 2007 - posted by RicheeDee
Footprints on the Beach is a great on the beach dinning spot with cozy cabanas and a great atmoshpere. The hostess takes your shoes and you walk on the beach to one of 6 tables (very small so reservation recommended). The whole setup was very nice and had lots of character. The menu was shaped like a foot and had a four course meal setup. The soup was a sweet crab and corn chowder, which was awesome and one our favorite foods on the island! Our salads were prepared per the chef and they were pretty standard salads. One meal was baby back ribs which was good but not the best I've had, the other meal was a roasted chicken and that was good. Dessert was a Mango Creme Brule and Apple pie a la Mode both were pretty good. $65 pp.
Had a great time and enjoyed the experience we will definitely go again.
8.0
10.0
10.0
10.0
n/a
n/a

The service was tremendous and the sunset was unforgettable.

It's the dining experience we have ever had that time stood still.