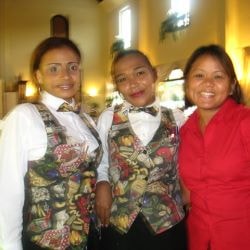 For more than 30 years our flagship restaurant Gianni's Ristorante Italiano is THE address for the best Italian food on the island. Gianniâ€™s Ristorante Italiano serves real Italian dishes for the entire family. Inspired by authentic Italian recipes and traditions, their menu includes favorites like Bruschetta Napoli, Bucatini Siciliana and Vitello Parmigiana. They also offer an extensive variety of specialties like their delicious Burrata.
Ratings

May 26, 2021 - posted by Stu
Third time and never again
This is the third time in the last three years we went to Gianni â€˜s. This is the third time the service was awful. After waiting an inordinate time to get kids meal served, they finally brought two out of the four adult meals. 10 minutes later, well almost everyone was done, my food came and it was cold and in the wrong sauce. My wifeâ€™s food never came. She will end up sharing her food with our daughter. To make matters worse, the waiter decided he was going to be nice and bring us each another round of wine. Instead of bringing the rather pricey wines we ordered before, he bought Some cheap on drinkable house wine. When I looked at the bill I found out why my wifeâ€™s food never came. It was never on the bill to begin with. He forgot to put it in. The manager did nothing to placate us and didnâ€™t even offer my wifeâ€™s food to go. I donâ€™t care how good the food is in a place, if the service stinks the place stinks!
Thereâ€™s too many other places on this island with good food. Never again

Feb 2, 2019 - posted by John
Its ok,nothing to write home about. Always seems crowded, but other italian restaurants in area offer a better dining experience. I wouldnt return Giannis
6.0
6.0
5.0
6.0
n/a
n/a

“One of our favorite restaurants”

May 15, 2018 - posted by Kat
I truly do not understand all the bad reviews. We do not get to travel to Aruba every year, in fact it has been 8 years since our last trip, but we always have at least one dinner at Gianni\'s when we are there. The food is pricey, sure, but you expect that in Aruba. The food has always been delicious and they did not disappoint this time either. My husband tried the stuffed oysters and loved them. I always get the chocolate salami for dessert. So good! Gianni\'s is one of our favorite restaurants in Aruba and we will be back!
10.0
10.0
10.0
10.0
n/a
n/a

Mar 24, 2018 - posted by Ted and Mary Kaczorowski
We getting ready for our yearly vacation to Aruba and were checking out some of the restaurants we have been.Surprised to see this restaurant is still there. Although the location is appealing the food and service stink. The cheese wheel is cool but check out the price. It is a ripoff.Nothing special at this place, and to add insult to injury you feel like you have just been mugged when after a long wait they present you with the check.
2.0
2.0
6.0
7.0
6.0
n/a

“One of the best meals I've ever had”

Mar 5, 2018 - posted by Melody
My boyfriend and I went back in mid November and I had a spicy squid ink pasta with lobster shrimp muscles calamari and scallops. It was probably the best meal I've ever had. I'm looking for the menu now so I can make it at home. The service was a little slow but they were busy.
10.0
5.0
8.0
9.0
6.0
n/a

“Amazing (did all inclusive and treated oursel”

Aug 22, 2017 - posted by chris
Everything was Excellent. I am an Italian/American New Yorker (Brooklyn) used to homemade sauce and Italian food. Been to pretty much every top Italian restaurant in NYC. Gianni's Aruba is a real treat, any negative reviews are probably from food chain lovers. I read some complaints about $ ( its worth the extra $10, don't be a cheapo. you're on vacation) Great food great service. Got my whole family's thumbs up. BTW we had all inclusive in a 4.5 star hotel . Thanks for the great experience. PS, I never leave reviews..
9.0
9.0
9.0
8.0
8.0
n/a

“Worst food I have ever had”

Aug 8, 2017 - posted by Nicole
This was probably the worst restaurant experience I have ever had. After eating this horrible overpriced food my entire family felt sick. This restuarant is a waste of money and I suggest you save yourself time and money by going elsewhere.
1.0
1.0
1.0
1.0
1.0
n/a

Jul 5, 2017 - posted by Kim Cancel
We were told by several of our friends to try Gianni's Restaurant. We did go for dinner however we found the food not so good. I'm not sure if we went on an off night or its always not good. My husband got Chicken parm and it wasn't good. The sauce is watery and had not taste. I got the Grilled Duck. I taste was good but it was over cooked. We never leave food on out plate and if we do we take doggie bags, but we left the food . It wasn't worth taking it home. I was very disappointed this restaurant came highly recommended.
6.0
8.0
5.0
8.0
9.0
9.0

May 24, 2017 - posted by Jabongga12
We had dinner here one time and we love the food. Staff service is excellent. Sometimes you really have to pay more to get this quality service. I ordered the seafood pasta and my husband ordered the Chicken Parm and he loved it. It was the best meal we had in Aruba during our stay in May 2017. The only downside is it's quite pricey. But it's worth it.
10.0
10.0
10.0
10.0
n/a
n/a
Showing reviews 1 - 10 of 177
Page 1 PrevNext
Write a review