Breakfast served from 8am till 11:30am
Lunch is served from 11am till 5pm
Dinner served between 5pm till 10pm 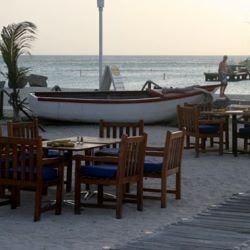 For a fresh approach to seafood, enjoy today's catch caught by Aruba's local fisherman by Hadicurari Pier daily. Enjoy indoor and outdoor casual dining in this beautifully shaded seaside Aruba restaurant which features an extensive menu of fresh caught seafoods and steaks and other splendid dishes all prepared with an international flair by our established chef and his team of culinary professionals.
Ratings

Dec 8, 2017 - posted by PaulS
This place has a terrific location on the beach but the food is just awful.. Every year we try again to see if has improved and are consistently disappointed. This will be out last visit. It's a shame, this place could be such a great place if they would only offer some good well prepared food.
2.0
6.0
5.0
8.0
n/a
n/a

Apr 12, 2015 - posted by ed
We stayed at the nearby Marriott but four of us ate at least 10 meals each at Hadicurari Aruba, The food was excellent, the view and setting, especially in the evening were just what we wanted in an island setting.
Waiters Ricardi Taura Marcial and Carlos were cheerful, accurate and very friendly. We felt we were with friends. On Wednesday eve we enjoyed free musical entertainment which was very talented. Will always go to this place everytime we go to aruba
9.0
10.0
9.0
9.0
9.0
9.0

“Definitely Not Worth It”

Nov 30, 2014 - posted by Dave Barry
Had Thanksgiving dinner there with my two adult children. Being on the beach made it a nice atmosphere. We waited a while after getting seated to give our drink order. My son, who ordered the sirloin was very disappointed; it was mostly grizzle and he ate around it leaving most of it on the plate. My daughter also left most of the Shark (catch of the day) on her plate. I had the Red Snapper that was mediocre; lacked seasoning and didn't seem all that fresh.

When we asked for the bill, the waitress noticed that I never received my second drink and she went and brought it to me after she gave us the bill. There was a service charge of on the bill of 18%, when I inquired what that was, she said that was half of the tip. I should include the other half in the tip section. Really? That's would be one heck of a tip for what was very pricey and very unimpressive food. One of our more expensive meals on the island and definitely our most disappointing!

Our waiter said it would not be much longer. LONGER?????

Dec 17, 2013 - posted by Marriott Man
Very nice location and the restaarant utilizes local catch so we decided to try the taste of the sea platter or whatever it's called. It was presented well and had excellent carribean spices. The sides could have been more prevailant but what can you do with plain white rice and curly fries. Described as a meal iwith vegetables we received one grilled tomato cut in half with a little cheese on top. They did offer us some tooty fruity type drink but it didn't sound too interesting. The young ladies serving were very friendly and worked hard. The quality was borderline because most things were cooked well but the mahi and the large lucious shrimp were hard and dry. The plate could have used more crunchy calamari and the butter wasn't tasting like much. I'd like to see more sides and veges available for the $88 we were charged. I'd also like to see better attention to cooking times on your main course. Also tell the host that theres no need for those snide remarks he makes as it's really a turn off.
6.0
9.0
8.0
8.0
n/a
n/a

Apr 20, 2013 - posted by Joan
Unfortunately, one year later, and our memory of dinner is still a Negative one. Other reviews speak of nice meals ; clearly we were there on an OFF night. It started nice enough - the pleasant host took us to a table for 4 on the sand. The environment was a sunset & pleasant chatter from nearby tables. Then things went downhill. The wait for a server to greet us, then take our drink order was way too long. When she finally re-appeared, she wanted our drink And dinner order at the same time.

We ordered drinks & appetizers, telling her we would order dinner shortly. 12-15 minutes went by before we asked where our drink orders were...eventually appetizers were brought by a different waiter. Had to ask for silverware. Dinner orders placed; *45 minutes* later they appeared (soups & fish, nothing exotic). Not sure if the problems were servers and/or kitchen??
We see no reason to spend our time and money at this eatery again.

May 8, 2012 - posted by Barry
We tried the restaurant because the location was great
and the reviews were Good. Guess it takes all kinds of
people to make our world. Beach barbaque was less then
good. The food was either over cooked or under. And the quality was poor.The shame is they have a weekley turnover
of new unaware visitors or they would be out os business!

Oct 11, 2011 - posted by Paul
We have been to this restaurant several times over the last few years and generally enjoy the food. This time, the quantity was a little less, the quality a little less and they still have their 15% service charge which is irritating. Normally we understood the service charge is for the servers, but in this case, according to the manager, it is simply an additional charge for the restaurant and the servers get nothing from this. The guests are expected to tip on top of this charge in order to reward the service staff.

We object to this policy and as a result will probably not return. Once you add the 15% on top of the listed prices, it is no longer comparable with other restaurants in the area.
8.0
7.0
7.0
9.0
n/a
n/a

Jun 15, 2011 - posted by David Jackson
After dining around the island for several days, we received a great tip about Hadicurari Restaurant. It is renown for its romantic sunset meals. As we made our way to the beachside restaurant, we were greeted a very charming maitre'd "Carlos." Carlos gave us a great Italian welcome and promptly seated us.

The staff was extremely accommodating and inviting. The food was exquisite and was easily the best food that we had during our entire 7-day stay. We quickly made another reservation to return closer to the end of our trip so that we could revel in its delights again.

The wine presentation was very formal but not intimidating.

Our second trip featured the seafood buffet. The barracuda and mahi-mahi was absolutely phenomenal. Charming. Pleasant. Romantic. This is Hadicurari in a nutshell.