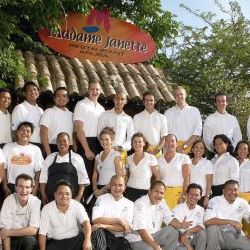 Ramon is responsible for the exotic fruits, herbs and vegetables you will find in not only our dishes, but also in most supermarkets on Aruba. Karsten, a European Master Chef, trained in 'old school' traditions creates, with help from his knowledgeable international
staff, tasteful and creative dishes. Their combined worldwide experience
gives their dishes an original flavour with a touch of Caribbean in it. We call it the Madame Janette Experience! We hope that you will have a wonderful dining romance.

“Any local diner in New York City will serve m”

Mar 30, 2021 - posted by Mikhail
I cannot even review the food and the service,
Please don’t waste your money just simple Alternative to this restaurant Flying Fish bone.
You will see the difference and enjoyment that that you will receive.
Bottom line I left restaurant totally shaking and thinking how they still in business for so many years. Would not never recommend

“The best on Aruba”

Feb 9, 2021 - posted by ROBERT CLAY PUDLEINER
This place is nothing like it use to be. The portions are way less. The onion bread not even close to how it use to be served. Plus the price are outrageous for what you get. Don't even bother anymore. Grouper, a cheaper fish is good but certainly not worth $40.00 a plate. No salad with it. No veggies with it. We were so disappointed as it use to be our favorite place to go. SO SO overpriced for what you get. I don't know why restaurants reduce the quality They get bad reviews and people stop going. We will never go again. The Buchaneer in Palm Beach is so much better. ANd the price so much better. They give salad and a veg. too and potato.
5.0
8.0
5.0
8.0
n/a
n/a

“best restaurant on the island”

Feb 24, 2020 - posted by Debbue Nastasi
We have been going to Madame Janettes since they opened - over 20 years. We go to Aruba every year for 8 weeks. We visit the restaurant at least twice while we are there and considered it our favorite restaurant on the island and always recommended it to people.
Last year when we went, the meal was just OK but we chalked it up to an off night for the restaurant.
However, this year, we were very disappointed. we had 8:30 reservations for 4 people and didn\'t get seated till 9:00. The salads were much smaller than usual and lettuce very limp; the dressing was not tasty at all. The meals were less than average. Paying $54 for a rack of lamb, we don\'t mind but when we asked for more bread, we were informed there was an extra charge for 4 more rolls. The staff looked exhausted and the place has just got to big!!!
Again, Very disappointed after spending over $250 for dinner.
I don\'t know what has happened, but they better figure it out because word is spreading that Madame Janettes has changed and gone down hill!!!

“WORST MEAL IVE EVER HAD ”

Jan 17, 2020 - posted by Dean Arseniu
My girlfriend and I started our vacation by joining Madame Janette’s for dinner on Monday 1/13/2020 and our dinner was amazing. Our server Patrick was excellent, everything so good in fact that we decided to go back on our last night 1/17/2020. This review is based on our experience this evening. Made 8:00 reservations, we were sat in a section in the corner with a new server. From our experience as both being a waiter and waitress we knew something was off. Waited about 10 minutes for a drink order, no biggie. Asked our server to put in appetizers she said hold on. Came back 10 minutes later to take our appetizer order. Caesar salad and caprese salad came out. I took one bite and send the salad back. Dressing wasn’t even on the salad. Server didn’t check on our appetizers and the manager came back and slapped the salad down on the table without a word. Took 3 more bites and ate the croutons then pushed it away. Absolutely disgusting, dressing was horrible. Caprese salad was decent. Tomatoes and mozzarella was alright not fresh. The toast they served was hard and the inside was soggy. Disgusting once again. After waiting another 15 minutes we still didn’t put in our entree order. At this point we were extremely disappointed and just asked for the check. We couldn’t even order entrees when we were willing to spend the money because no one took the order. We left without finishing anything on our plate, server didn’t care at all. Once we got back to the room( 5-10 minute car ride) my girlfriend Vomited everywhere from the caprese salad. Called the restaurant right away and asked for a manager. The “manager” said there was nothing wrong with the salads and that was that. We come to Aruba almost every year and this was the last time we will be dinning here. We understand things happen out of control but every single thing that could possibly go wrong, did. Think twice about joining this “high class restaurant” for dinner because there are many other better restaurants than this. Extremely disappointed for a “5 star restaurant” UPDATE: both of us have thrown up from our meal. May have food poisoning and this is the first time that has ever happened from a restaurant. Wow I’m at a lost for words holy s****
1.0
n/a
5.0
5.0
n/a
n/a

“Service was having a bad day?!”

Oct 10, 2018 - posted by Vacationers from the South
Things were going well until the food came. My wife's inaccurate entre was detected by the waitress and returned to the kitchen. After waiting a few minutes, I began eating and was almost finished before her dinner was served. No apology or explanation was given. We later learned that her entre was a different type of fish than she ordered, Snapper vs Grouper. If we had been told how long it would take to prepare the correct order, she would have readily accepted the initial meal, but we were not given a choice. And after asking the waitress for a desert menu, she never returned to take our order. After waiting for about 20 minutes, another person who appeared to be a supervisor or manager asked if she could help us with anything, so we gave our orders to her. And again my wife did not get what she ordered which was a simple piece of Chocolate cake. Instead, she was served a Chocolate Souffle; it was very good. Just fyi, I paid a full bill plus a 20% tip. I thought maybe they were just having a "bad day," but I will not be going back to find out!!
8.0
4.0
8.0
7.0
n/a
n/a

Aug 18, 2018 - posted by Irene Wroblewski
We had a honeymoon dinner there this week. They treated us so wonderfully it was by far my favorite place we went. Our servers Samuel and Enrique were a big part of making it so special. They were the best servers we had on the island and we ate out every night. Everything was delicious, the entertainment was great. I will be back no doubt when I come back to Aruba
10.0
10.0
10.0
10.0
n/a
n/a

“Not worth the price”

Feb 11, 2018 - posted by Jay V
A truly dated restaurant. Food and presentation average at best. Tried the special which sound good on the menu, but everything we received was over cooked. Very expensive for what you get. Much better options on the island. They are busy with mostly an older crowd, so must be why they're not even trying.
6.0
8.0
5.0
7.0
5.0
n/a

Feb 4, 2018 - posted by Neal Smith
We ate there on 2/3/18 for a 6:30 seating near the entertainment section. While the sun was still out everything was ok. However, when the sunset we could not see our food and asked the staff for 2 candles, but they didn\'t help. We had to use the flash lights on our phones to see the meal. The main courses were fine, however the creamy spinach was watery and the rest of the side dishes where cold when served. It took for ever to get our bill once we completed our meal. We got the feeling they were trying to keep us there because they weren\'t that busy on a Saturday night. Too bad, because this used to be our favorite restaurant in Aruba.
8.0
8.0
8.0
6.0
3.0
1.0
Showing reviews 1 - 10 of 554
Page 1 PrevNext
Write a review