See our Local Special Promotion at our Dinner menus 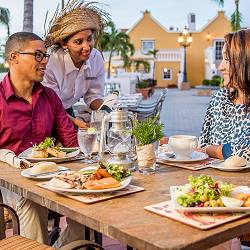 Located on the Amsterdam Manor Beach Resort property below the Horizons Bar, Mangos serves breakfast and dinner outside under a covered patio, providing guests with a refreshing Caribbean Sea breeze. Offering both a Continental and American breakfast buffet, Mangos starts your day off right with a made-to-order station featuring freshly made eggs to your liking, waffles, and more.

For dinner, enjoy one of our theme nights at Mangos Restaurant for a cozy evening that will take you all around the world. Offering Italian, French, Local Fisherman, and Asian nights with a a-la-carte menu, each night at Mangos is a culinary experience unlike any other. Click here for our nightly menu and learn more about our theme nights below.

Mar 15, 2011 - posted by Kathy & Lee
We visit Aruba annually and a stop or two at Mango's is a tradition. We started going there for our "light" nights out and ordered soup and salad .. which vary nightly ...they offer wonderful homemade soups and salads. This year we ate a full meal at Mango's on our first night in Aruba. We ordered their garden salad ... fabulous ... and one of us ordered grouper and one ordered snitzel. The grouper was superb .. the snitzel was slightly overcooked, but had a good flavor and the portion was huge. This outdoor resturant is worth a stop. Nice ambience and the prices are very reasonable.
8.0
8.0
8.0
9.0
n/a
n/a

Sep 12, 2010 - posted by Tina P.
Below is a copy of a letter I wrote to Amsterdam Manor and I would like to share this with you:

My daughter and I stayed at the La Cabana Resort next door to you last week, and my parents stayed there another week and come home today.

When my daughter, Angela and I visited Mangoes last Friday we met the most delightful person, Theo. We liked him and the food so much that we ate breakfast at Mangoes for breakfast the very next day. My parents have been to Aruba 14 times and this was the first time they ever been to Mangoes, and they loved it. Walking around your grounds was beautiful and very clean.

The next time I come to Aruba I would like to stay at The Amsterdam Manor. And I think my parents would also like to stay there as well. If we are unable to get accommodations there we will definitely go to Mangoes for breakfast , lunch and dinner , because the food is very delicious. My daughter has had Onion soup every place she goes( Italy Germany, and all over Aruba) and Mangoes has the best.. I would love your recipe, if you can manage to get it to me that would be great.

Theo was the best and the nicest person that we met on our trip. Amsterdam Manor is very lucky to have him as an employee. Thank you for making our trip AAA+++.

Feb 9, 2010 - posted by Dave & Penny
Escargot different but very tasty. Grouper melted in my mouth. Wine list was adequate. All was reasonably priced and of good value. Portions to large for us seniors (lunch next day) so no room for desert that we wanted to try!
9.0
10.0
9.0
10.0
n/a
n/a

Jan 3, 2010 - posted by Jim Schaffer
My wife and I just returned from staying for seven days and nights at the Amsterdam Manor in Aruba. This was our ninth visit to the island, but it was our first stay at Amsterdam Manor. What a wonderful experience! During our stay, we enjoyed both breakfast and dinner at Mango's Restaurant at the Amsterdam five times each. The breakfast was always great and dinner was always wonderful as well. The staff at Mango's was also especially friendly, gracious, attentive and knowledgeable. All five dinners I had were superb. I especially enjoyed the seafood. The grouper was very tasty and the mahi mahi and red snapper specials were quite outstanding as well. I also enjoyed the French fillet mignon and the surf and turf specials. Both pieces of beef in those dishes were done to order and to perfection. The kitchen staff apparently knows what medium-rare means. My wife especially enjoyed the chicken dish that she had on our first evening, as well as the lamb and the pork chops. The food was just wonderful each and every time we sat down at the table, but I have to mention again about the staff and how great they were. What a wonderful visit. We just cannot wait to return to the Amsterdam Manor and to Mango's restaurant as well. We hope that we can be there again soon.
10.0
10.0
10.0
10.0
n/a
n/a

Dec 20, 2009 - posted by Henri & Suzy
As we were staying at Amsterdam Manor, we had our dinner regularly at Mango's. Great food, beautiful and restful setting, and a very friendly and excellent service. Compliments for the whole Mango-team !(with a special mention for Alice & Diana)
9.0
10.0
9.0
9.0
n/a
n/a

Oct 21, 2009 - posted by ~Amy~Â®
Our new favorite entree here is the lamb chops (absolutely perfect) and our old favorite, the crab salad, was wonderful once again. The mango cheesecake was nice and light and not overly heavy like a typical cheesecake - which is nice for a hot night in Aruba! Service was good and love sitting outside in a quiet atmosphere while listening to the water from the nearby fountain.
9.0
9.0
9.0
9.0
n/a
n/a

Aug 9, 2009 - posted by Angel
We dined at Mangos Restaurant on our last night in Aruba after having read all the great reviews on this site. The food and ambiance were very good but the service was ATROCIOUS!!!!! I work in the restaurant industry myself and I am generally VERY forgiving, but I think that we were served by the absolute worst waitress on the island. She looked like she was completely lost. It was a slow night in the off season, and there were only 4 tables sat in the restaurant (2 servers, 2 tables each) so there's really no excuse. I can forgive that she never checked back with us to see if we were enjoying our food, that we had to pour our bottle of wine ourselves, that we couldn't get our water glasses refilled, that we had to repeat our order to her 3 times, and that after our appetizer was cleared we literally did not see her again. But there are two things that I cannot forgive. The first is that after our appetizer, we were never given silverware for our main courses. Thank God I kept mine (my boyfriend had his cleared) because we literally had to share one set of silverware and I had to cut my steak with a butter knife. But the main issue that I have is this - I made it very clear to her that I am allergic to tomatoes. I told her twice, and that I would get very sick if I ate them. She assured me that all the dishes that we ordered were tomato free. The appetizer was fine, but then the main courses arrived. EVERY DISH that came out had tomatoes on it. The Carribbean shrimp were served on a bed of tomatoes. The Filet was served with mixed veggies that had tomatoes in them, and the garlic butter that was served with it on the side had chopped tomatoes in it!!!! A different waitress brought the food to us and thankfully, when we told her the problem, she was very quick to remedy the situation. At this point our original waitress had disappeared. The second waitress pretty much took over from there, and honestly the service improved exponentially. I wish we'd had her in the first place.
But there are positives about Mangos. We started with the Beef Carpaccio which was delicious!! We had 3 main courses between the two of us because we couldn't decide on just two. My boyfriend had the Almond Crusted Baby Snapper, and it was perfectly crispy and had just the right amount of sweetness. I had the Filet which was cooked to a perfect medium rare and was really tasty. We also shared the Caribbean Shrimp which were some os the best shrimp that I had on the Island. For dessert we had the Flambeed Bananas which was really tasty and a Brownie that wasn't great but it was the chocolate fix that I wanted at the time. The resturant itself is really a cute little place, especially after the sun goes down. So go for the food and the atmosphere but pray that you don't have the same waitress that we did... especially if you have any dietary restrictions.
9.0
1.0
9.0
8.0
n/a
n/a

Apr 29, 2009 - posted by ~Amy~Â®
Dined here twice because we liked it so much. Had an incredible filet mignon with peppercorn sauce one evening and the grouper with lime sauce on the other - both were great. For appetizers, had the crab salad and onion soup - loved both! Atmosphere is very nice - open air with the sounds of the fountain in the background. A very nice, relaxing dinner with great food and service.
10.0
10.0
10.0
10.0
n/a
n/a

Mar 15, 2009 - posted by Bob and Donna
This was our fourth time in Aruba, but our first time at Mango's. It was a great experience. The grouper with lime sauce was wonderful. The best grouper I have had. My wife had baby snapper with almonds which was also delicious. We both had the crab salad for an appetizer. It was good, but I wouldn't give it the great reviews of others. The facility is very clean, staff is friendly and the atmosphere is pleasurable.
10.0
8.0
10.0
10.0
n/a
n/a
Showing reviews 11 - 20 of 45
Page 1Page 2Next
Write a review