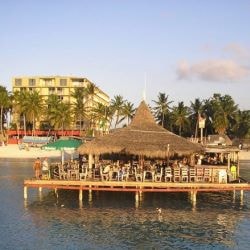 Aruba's favorite restaurant completely above the water offers many unique attributes; the spectacular view at any time of the day and especially during sunsets, the wide array of fresh seafood, a relaxing atmosphere, exclusive seating for dinner and the option while dining to feed the fish. Our Peruvian chef makes a famous and delicious fish ceviche.
Ratings

Aug 20, 2014 - posted by Aruba man
Can't believe this restaurant is on this list. This place was terrible. I should have realized it when I walked in and there were only three tables taken. I should have walked out then. 65 percent of the food on the menu was fried and unhealthy. The portions were good but what difference does it make if the food is no better than crabby Jerry's in the states. The location is great and feeding the fish is the highlite of your nite. Don't bother there are too many good restaurant on Aruba to choose from.
2.0
2.0
2.0
5.0
4.0
4.0

“Lack of Class in Service”

Jun 15, 2014 - posted by Artie84
Great and super location on a pier, over the water and off a beautiful Moomba Beach. We made reservations on Father's Day, June 15, 2014 and arrived at 6pm for the early special. We waited 3-5 minutes to be seated as no hostess was at the front. We waited 10 minutes to get water and to order drinks and an appetizer (which we also ordered main courses at the same time). After one hour, we were told one of the courses was no longer available. So we re-ordered and the food did come quick then (grouper and red snapper). The food was excellent. The service was spotty and poorly managed at best and a new supervisor should be hired. I could run this place more efficient and make a ton of cash for the owner. The saving grace is location and quality of the food but I will not eat here ever again and come to Aruba for two weeks annually.
9.0
3.0
7.0
9.0
5.0
n/a

Aug 18, 2013 - posted by Leo
This place has an amazing location. Here you are dining on a pier right above the water. This place gets 10 stars for location! Having drinks while watching the sun setting was priceless. The bad with this place are food and service. Food wasn’t anything to brag about. I would not recommend you getting dinner here. The appetizers are ok. Grab some drinks while watching the sunset, and pick on some appetizers. You will really enjoy the privacy, as the servers hardly check on you. Just make sure you order your drinks ahead of finishing your current one, as refills took long to arrive.
4.0
2.0
4.0
9.0
8.0
4.0

Jun 25, 2013 - posted by Amigo
We found this little happy spot ($4 any drink 4-6) Tried the food and it was absolutely delicious. Went back next day for happy hour (what a time) and tried other menus items. Went back daily (yes, it's that good of a time) to hang out with Jonathan and Jose. Last night there we had dinner in the waterfront restaurant. Outstanding food, excellent prices and a great atmosphere.
10.0
10.0
10.0
10.0
n/a
n/a

Jan 18, 2013 - posted by Barry
We are visiting Aruba for the first time. However, we are frequent travelers to the Caribbean and Honolulu. This restaurant was not on our GPS so we had a little difficulty finding it. When we arrived about 7:45 PM there was a line of about 8-10 people. After about five minutes a foursome at the front of the line became agitated with the hostess because she was not keeping people informed about the length of the wait. They abruptly left in a bad mood. Several minutes later we were seated. The eating area is extremely dark and the menu was difficult to read even with glasses. Or rolls were delivered and they were cold and dry. We ordered Red Snapper. several minutes later we were told they were out of snapper. We ordered Grouper instead. The Caesar salad was very good. Our Grouper was good, but the sides were one ice cream scoop of rice and medley of veggies. When we got the check I informed the Hostess/ Waitress about the bread. Her response was I am sorry about that. We spent $80.00 with no alcoholic beverage. The following night we dined at the Renascence downtown Marriott seafood buffet. For $100.00 we enjoyed lighting, Tuna, Grouper, Mahi Mahi. Maybe The Pelican Nest is a better daytime place on the water. We won't return.
7.0
5.0
5.0
6.0
n/a
n/a

Aug 7, 2012 - posted by mina
The pelican nest is a must every time my family and I return to the wonderful island of Aruba. The lunch is great but there is nothing better than enjoying your dinner with a bottle of wine and watching the fish swim. The location brings so much tranquility.
10.0
10.0
10.0
10.0
8.0
n/a

Apr 25, 2012 - posted by Becky
This was our second visit to the Pelican's Nest. Our 1st visit was great...perfect views at sunset and food was awesome. It was a priority to visit the resturant again on this trip. The service at the resturant was very poor. The music that was being played was very inappropriate (parental guidance suggested) and the waitresses dancing were very inappropriate as well. The food was good, we ordered the whole snapper, but a bit pricey. We were a bit disappointed in this visit and don't know if we will return.
9.0
4.0
8.0
10.0
n/a
n/a

Mar 25, 2012 - posted by Mary S
We have been going to Aruba for the past 8 years and luckily stumbled on The Pelicans Nest the first year. We have had various items off the menu including our favorite the grouper. All have been really fresh and prepared really great. The atmosphere over the water is fantastic especially during sunset. Some of the tables are right on the water (like don't step too far no ropes) I think that is really fabulous. The prices are really reasonable. I think most of the restaruants on the beach cost much more.
The thing that is a bit different and you are readin about in some other reviews is the 15% that is not counted as gratuity. It is something like a tax that the owner has to pay for renting on the water and passes it down to us. I don't like to assume it is a gratuity anyway as the servers rely on gratuities to live. They are all great by the way.
The way I defer that if to go on a website that offers coupons like "arubadiscounts.com" and this will give you a coupon to take off 10% of the bill. At least it takes care of some of that tax if it really bothers people. Otherwise I feel it is one of the best atmosphered restaurants on the island. Best food. Best people.