Opening Hours:
Every day from 4pm till late 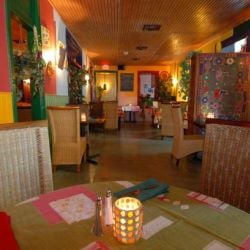 Let us tell you a little bit about the history of Que Pasa. In 1992 a few young guys started the restaurant after a great night out in town. In an old "cunucu-style" house Que Pasa began growing from a small bar-bistro to a mature restaurant. We have been trying to improve the quality ever since and keep the atmosphere like it was in the beginning. We'll hope to see you soon, and have a marvelous time.
Ratings

Sep 20, 2016 - posted by David Bina
I chose this restaurant for our 1 anniversary dinner due to its good reviews (google and trip advisor). I can say that the overall experience was nice: the waiters are really kind, the place is nicely decorated with art pieces that can be bought and the food (a bit on the gourmet and on the small side) was very good. We ordered the grouper (fish), and a fillet mignon, which is served like a burger with seafood in between two loafs of meet.
I already knew that the restaurant was expensive (e.g. the fillet mignon dish was $28,5). However, when the bill arrived I noticed that I had been charged $6 extra for the two side dishes (french fries), which I thought was included in the dish prices, because their menu explicitly says that the side dish is included with the main dish. To make matters worse, my fillet mignon cost one extra dollar ($29,5) for some reason, even though I double-checked the price on my way out, and it was $28,5. I felt ripped off! I can tolerate one honest mistake, but two mistakes in the same bill is surely no coincidence!
The place is definitely nice, cozzy and the food is top quality, but I didn't like the street-smart attitude to get more money out of the customers.

Sep 17, 2016 - posted by Irene
This is a restaurant always on our list of nice restaurants in Aruba. Always: good food with interesting entrees; friendly service and interesting location. This year we have decided to return for a second night.
10.0
10.0
10.0
9.0
n/a
n/a

Apr 22, 2016 - posted by mike & sally
Another GREAT restaurant in Aruba. We always go to this restaurant every time we go to Aruba. Marvin always greets us with a smile. His wait staff is very friendly.
The food at Que Pasa is served fresh and hot . The presentation is beautiful. I think this is another hidden jewel in Aruba. The restaurant is located down town behind
the renasance hotel. Marvin keep up the good work ! Oh YA, one more thing the food is good too.

Apr 5, 2016 - posted by Amy Nissan
We always stop at Que Pasa when we're in Aruba. It's a funky, fun place, where the staff treats you like gold and the food is consistently good. They always have specials so the menu doesn't get stale. Plus it's in the heart of downtown, so you get a feel for the city of Oranjestad. Highly recommend you try it!
8.0
10.0
8.0
10.0
9.0
n/a

Mar 23, 2016 - posted by Kim & Greg
My wife and I were recently in Aruba for 2 weeks and visited Que Pasa 4 times during our stay. On each of our visits we sat at the bar and experienced a wonderful meal served by the owner Marvin. Marvin has become a good friend and part of our Aruban family. During each visit Marvin remembers what we had from our previous visits and recommends new dishes and preparations. Amazing appetizers, main courses and don't forget the rum raisin creme brulee. Marvin, kudos to you and your amazing staff. Were already counting down the days until we see you again next year.
Many thanks, Kim & Greg
10.0
10.0
10.0
10.0
n/a
n/a

Dec 9, 2015 - posted by Debbi
We found Que Pasa by accident last year, and have had 2 amazing experiences there. The most recent was last night. Our waiter, Bas, was charming. The food was delicious, wine selection great.
Will definitely keep Que Pasa on our yearly list of dining destinations.
10.0
10.0
10.0
10.0
n/a
10.0

Nov 17, 2015 - posted by Doug and Dan
We've been coming to Aruba for over 17 years and always make Que Pasa our first and last stops for dinner. As we were in Aruba for 3 weeks this year, we had dinner here 4 times. We love it here. We 've always found it to be one of the best places to dine in Aruba. The menu changes daily and is always a treat to explore new dishes. There is also their regular menu from which to choose. Between the two options, we order the things we love so much to come back for and enjoy trying the newer items. Marvin has done an excellent job in presenting a dining experience that is of a consistently high level. The staff, sometimes new, but never lacking, are a fun and energetic group of young people. (how do you do that?!) Always welcoming, smiling and helpful. The tuna and wahoo tataki are a must for us as is the beef carpaccio. This year there were really interesting new items. (BTW, some people think Que Pasa is a Mexican food place. It's not.) Located in downtown Oranjestad, the restaurant is just charming and quite large in high season when they open their outdoor terrace on the upper floor. Many of the items on the walls are for sale and make wonderful remembrances of this fabulous place. Needless to say we have quite a few! The restaurant is also frequented by locals and that's a plus too. We can't wait to return next year.
10.0
10.0
10.0
10.0
10.0
10.0

Jun 3, 2015 - posted by Hartges
We go to Que Pasa every time we visit Aruba. The staff is wonderful, very friendly and helpful. Nice young people. The chef is wonderful. The specials every night are very fancy and delicious. Great food and varied menu. We came back and requested an item that we had once before on a special. The chef once again made the dish for us. We will definitely go back.
10.0
10.0
10.0
10.0
10.0
10.0
Showing reviews 1 - 10 of 298
Page 1 PrevNext
Write a review