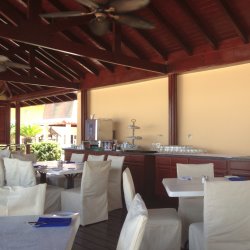 Our Menu offers a variety of an International Cuisine with the excitement of our Caribbean-Aruban soul. During the day the Ricardo’s is a refreshing, light and airy restaurant for Breakfast and Lunch with a great view of Aruba white beaches. Transformed by candlelight in the evening, a warm and intimate atmosphere together with our attentive staff that will take great care of your dining experience. Ask me or our staff for our daily specials and let me give you a great dining experience.
Ratings

Jun 16, 2021 - posted by Carla
I, along with my family and friends had dinner on a Sunday evening. The host was fine. Sat us at our tables, filled our water glasses and said our server would be over shortly.

Tony was our server. Tony was hostile, aggressive, argumentative from the start. We have no idea what’s going on as he literally just came to our table. We asked if we could have separate checks for some. I don’t know if it was because we asked for separate checks or what. We did not understand why. We asked if we could order drinks first. He said, no !! We had to order our drinks, appetizers and entree all at once because it was easier for him. Mind you, we had literally sat down. When we asked if we could order drinks and appetizers and look over the menu, he said no!! We asked why??? He had the audacity to say, he had a party of 19 the night before, he tapped his wrist and said they were his color( we are people of color) and they were horrible. He actually said they were horrible. We became upset and said, we are not those people and do not judge us accordingly. Well Tony wasn’t having it. He said they were rude. We told him it was not fair to judge us. He became loud. We tried to calm him down, but by this time another server saw what was going on. The other server said something to the gentleman who sat us.(yet no one from the restaurant intervened) Tony then walked away. Once Tony came back he took our drink order and appetizer order. By this time all we wanted to do was eat and leave.

We placed our order, ate as fast as we could. Tony tried to apologize saying the people of color(again) (which really made us uncomfortable ) had him upset last night and he thought we would be the same. He tried to lighten the mood but the damage was done.

I think what baffled us is when Tony began to get loud and things escalated management should have, but never intervened. A different server. An apology. Nothing. Not once did anyone come over and ask if everything was okay. We did not ask for a discount. We did not ask for anything free. All we wanted was a nice dinner and management to do something. Anything!! We were very disappointed in how the situation was not handled.

Would we go back ? No
Would we want to have Tony as our server? ABSOLUTELY NOT !!!

Ricardo’s is beautiful, but after this encounter we will definitely stay away from this place.

Sep 4, 2017 - posted by Josh Weiner
I went for the all-you-can-eat rib special. It came with potatoes and coleslaw that were inedible. The rack of ribs was a good portion, however it was dry, unseasoned, tasted as if it was drowned in AI steak sauce and had less meat on it than a sub-par NYC diner meal.

Two people at my table had tuna, which was the blandest tuna they've ever had, and required a knife to cook through.

I have come to Aruba for 18 summers, and this meal was my least favorite.

Jan 4, 2016 - posted by Glenn S
Went here xmas night. Party of 8 with 2 infants. Service was great and the food was some of the best we have had in the 15 years of visits to Aruba. The fried scallops in coconut sauce was amazing and the lamb chops were cooked perfectly. The portions were large and presented beautifully. Hard to please 8 New Yorkers but they did it!
10.0
9.0
9.0
10.0
10.0
n/a

Aug 21, 2015 - posted by patty bofill
i have been going to aruba for 11 years now and have eaten at many many places but my first dining experience at ricardos last year was delightful and probably the best i have had! we had to go back twice in one visit!
as all the reviews state, ricardo himself is very hands on and charming, escorting you to the table and making you feel special all night long!
his staff is wonderful and very respectful. service is excellent, even with a full house of large groups! the food is delicious, presentation appealing and a nice selection.
the location is great. you can have a lovely romantic dinner on the beach, or a fun filled dinner on the deck! and don't forget dessert!!!
and if that isn't enuff, you can have drinks and MORE fun at the bar!
a definite must go to! i am returning to aruba this september 2015 and it is on my list of priority places to dine! wouldnt miss it!!!

“Will definitely be back”

Mar 29, 2015 - posted by John and Sue
A great and quiet location on Eagle Beach where you can enjoy a terrific meal with an owner who actually does care about his customers satisfaction. Service was excellent, yet discreet so you could enjoy your meal under the stars and lights of Eagle Beach. Great private setting
9.0
10.0
10.0
10.0
9.0
8.0

Oct 28, 2014 - posted by Chris Triz
I don't even know where to begin with Ricardo's, so I will begin with Ricardo himself. A personality that makes you want to go back because you want to hang out with him - and he does hang out. He is an owner that is very hands on. He brings you to your table, he gives you his favorite picks from the menu, he is extremely personable and genuinely cares about his business. His staff is exceptional all around. Very friendly and very attentive without being annoying. Ricardo brings dishes out from the kitchen and will gladly show them off to you as he walks by while you try to decide what you want.

The service is top notch. We were a party of 6 with a party of 14 next to us...we said oh boy this could be trouble. Not a glitch! It was like they weren't even there. I can see why this place attracts large groups, there is something on the menu for anyone and everyone. It is also a very romantic spot and we noticed, groups were seated together and couples were able to sit romantically away from the crowds.

The setting is gorgeous, outdoors on a covered deck and some tables in the sand.

The food...WOW. Our group has all different tastes and finding something for everyone is sometimes challenging. Not at Ricardo's....when I say something for everyone I mean it and the quality and presentation is outstanding. I was having a hard time deciding and was so glad everyone's meals were so diverse so I could do some sampling ;-) My meal was very tropical and I find myself drooling for it since I got home. My app was fried goat cheese with mango sauce...I could have had 10 of those!! My dinner was coconut/pineapple shrimp with...I'm getting hungry just typing about it. My sister had the lobster pasta with vodka sauce...huge portion and soooo very good. My mom had seafood pasta which came out in a foil pack shaped like a swan...again delicious. My husband had ceviche for app and it was excellent and so was his grouper with mango sauce. The others had steak and were both very pleased with their meals. Not one complaint from the group and we all said, if we would have went earlier in the week, this would likely have been a rerun by the end of the week, but we were there on Thursday and were leaving Sunday. I would have like to have some lunch there before we left but there just wasn't enough time to stuff everything into those last days...you know how it goes when it starts to wind down :(

It was our 9th wedding anniversary and Riccardo came out with an ice cream dessert for 6 with sparklers going and him and the staff celebrated around us.

Jul 15, 2014 - posted by Doug and Dan
After more than 15 years of vacationing in Aruba it's always great to come across a new dining option as good as Ricardo's is. There were six of us for dinner. We were greeted warmly by Ricardo as we entered. While it's not too large, the setting is more than comfortable and very romantic. The setting is just beautiful as it is on the beach and the food and service matched it. We ordered the sangria and two of us had the rack of lamb special. Delicious! All of us were very happy with our meals. We'll return again...and again....Excellent!!
10.0
10.0
10.0
10.0
n/a
10.0