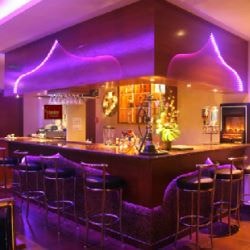 Apr 8, 2017 - posted by Nirav and Audrey
We were fortunate enough to have our Indian-Filipino wedding at Tandoor the Indian Grill House. The owner Rajesh and his wife made sure everything was perfect for our Day! They made sure all our guests were well fed with delicious food and the staff were friendly, attentive, and hard working. We were so happy and blessed. Thank you so much for everything!
10.0
10.0
10.0
10.0
10.0
10.0

Nov 23, 2014 - posted by Randy, Ottawa
Hard to figure the other reviews given. If they are true (and I am suspect) then the restaurant has really improved in the last year. We ate there twice and had takeout once in our two week stay. Great!
Different dishes from what we normally see, in good portions and at reasonable prices plus a great house red at $5 for a large glass. Staff friendly and helpful.
A lovely room as well.
What's not to like?

Feb 19, 2013 - posted by Marie
We dine out every other night both on vacation and at home. WE have had good and bad experiences but have never had such bad food in all the years we have been traveling or dining out in Metro NY. And, we do go to Indian restaurants often. The food was close to inedible. to add insult to injury, we took most of it home to give to the dogs on the beach and even they would not eat it. can't believe they are still in business.
2.0
4.0
4.0
4.0
5.0
6.0

“AVOID AT ALL COSTS”

Feb 19, 2013 - posted by Steve
We dine out every other night both on vacation and at home. WE have had good and bad experiences but have never had such bad food in all the years we have been traveling Worldwide or dining out in Metro NY. And, we do go to Indian restaurants often. The food was close to inedible. to add insult to injury, we took most of it home to give to the dogs on the beach and even they would not eat it. can't believe they are still in business. We ordered different dishes, tandoor shrimp and mixed grill. absolutely the worst ever.
1.0
5.0
5.0
5.0
5.0
8.0

Jul 8, 2012 - posted by George
This restaurant is a perfect example of why the feel of a restaurant is almost as important as the food. I have 2 vegetarians in the family and they both liked the variety of choices and enjoyed their meals. I had the chicken leg dish which was very tasty and I would eat it again... but not at this restaurant.
I can actually say this is the first time in my life that I was bored eating in a restaurant. The staff could not have been less engaged. They did not provide any guidance on the menu, did not smile and for most of the meal just leaned against the bar. Don't get me wrong, they were not rude, they just seemed as bored as we were. I also would have expected some background music to compliment the indian style meal... instead there was no music at all. Even the worst restaurant on the island still have energy. This place was just dead!
This restaurant could easily do well if the owner makes some changes in staff, provides some guidance on choices and plays some music

Mar 15, 2012 - posted by Dave and Jan
We cook Indian food and visit Indian restaurants at home and when we travel. This restaurant is as good as any Indian restaurant we have been to. If you do not like your food hot on the tongue, order "mild". We usually order "medium" but have found great differences in how that is defined across the spectrum of Indian restaurants we have dined in,and in this restaurant "mild" was about right for us. The chicken Tikka Massala was particularly good, although everything we ordered was well prepared and quite delicious. Service was excellent and prompt (although we dined early and can't comment on how things might go when the restaurant is busier). If you are ready for a break from the usual island dining experience, try this restaurant and its excellent Indian cuisine.
10.0
10.0
9.0
9.0
n/a
n/a

Oct 12, 2011 - posted by ~Amy~Â®
This was a nice break from the usual steak/fish restaurants in Aruba. Absolutely loved the chicken curry - great flavor (I ordered it medium spicy and it was perfect) and tender pieces of chicken. Also had a small salad (Kachumbar) on the side that went well with the curry. This was a great find for me and will definitely be back again!
9.0
8.0
9.0
9.0
n/a
n/a

Jul 19, 2011 - posted by Mark
We were solicited by an employee in front of the restaurant and happened to bump into a couple who had just eaten there. They raved over their meal which convinced us, this was THE place for Indian food in Aruba. We were greeted and seated promptly. Servers were very friendly however not very knowledgeable about their menu. Specifically, when asked about their Lamb Chop Biryani, the waiter indicted the restaurant referred to it as Mutton NOT Lamb. He had never had it before so he couldn't comment on it. That should have been the signal not to order. I have had this same dish before elsewhere and it was fabulous. At Tandoor, I couldn't tell what it was. I later did some research and found out that lamb is from a 4-6 month old animal and Mutton is from a much older animal… the younger the tastier. For $18, a few pieces of lamb and rice, I expected a lot better. I barely ate the meal and informed the waiter and the assisting waitress of the taste (or lack thereof) however no compensation was made. The 3 “different meals” we ordered all looked and taste the same. My son and I both felt ill after eating ours although didn't get sick. Beyond the restaurant, when visiting the men's room, not only was there NO toilet paper, there was NO sink or running water... so nothing to wipe and nothing to wash your hands with. Which made us think, what did the employees do? When asking the waiter he shrugged his shoulders, indicating it was under construction for 3 days and there was nothing he could do. If you have had quality Indian food and service before along with accommodations to clean up, Tandoor may not be the place for you.
4.0
2.0
2.0
7.0
n/a
n/a

Jun 2, 2011 - posted by Eric
We chose Tandoor last minute while walking by. We are from NJ and frequent an excellent Indian restaurant in our area. This matches, if not exceeds the food there. I didn't expect anything great and was very pleasantly surprised by the quality of the food. I had the Tandoori grill and my wife had a lamb dish. Both were superb. The naan and rides were just right also. The service was a bit inattentive but due to the quality of the food I overlooked that. Previous poster mentions a 10 percent tax. On my bill it was broken down to 1.5 percent tax and 8.5 percent service charge which many restaurants on the island charge. I adjusted my gratuity accordingly. We will return.
9.0
6.0
9.0
9.0
n/a
n/a

Apr 10, 2011 - posted by aj
Our dinner at this new restaurant started out nice, but went downwards quickly!
We were welcomed and seating right away and were given a traditional bread to begin with, but from then on everything took forever; both food and service. But the most ridiculous thing was that they charge a 10% sales tax (being local i know for sure it's only 1.5 % on Aruba!) and no of the waiters could tell us why they charged this and told us there was no manager owner present to explain. What a ripoff, won't go back
6.0
6.0
6.0
n/a
n/a
n/a
Showing reviews 1 - 10 of 11
Page 1Page 2
Write a review