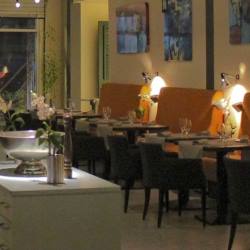 Wilhelmina Restaurant offers a place to dine, celebrate a party or just having a cocktail at the bar in a classic, elegant, casual and relaxed environment in down-town Oranjestad.

Wilhelmina is an adult only restaurant (12 years and up).

“One of my all time favorites”

“Recently vacationed in Aruba for 10 days so w”

Mar 25, 2019 - posted by Shavon l Dorsey
Recently vacationed in Aruba for 10 days so we tried almost every restaurant that people recommended to us. We were told by a few people that it was one of the best, if not the best restaurant on the island. So we went on the night of my birthday and was extremely disappointed. We get there and the first lady was nice but she took us out side which was nice. She said we would wait a few minutes and once someone got up we would be seated. They ended up just putting us at this big round table outside in the back of the restaurant. The second lady that told us to sit asked if we wanted bottled watered we said yes. She did not ask us what type or if we wanted sparkling.

After 8 mins of waiting for a server to come or even a menu. A server walked passed us 3 or 4 times to help out the two tables across from us. When their check was presented, I also heard them ask if they needed a taxi. Which I noticed a few of the other restaurants did as well. My boyfriend started to get upset because he was already questioning why the lady didn't take us to the table originally in the inside. I being a server in my past tried to justify saying maybe we weren't in her section. 2-3 minutes later the second lady who seated us walked by and said "No, water?" and quickly walked off. The server we had seen past a few times came to the table and introduced herself and was about to open the water. It was sparkling and we actually wanted still. We stopped her before she opened it and she went and got the other bottle.

2-3 mins later the second lady comes back with the water and ask us if we are ready to order. I ordered the Lobster bisque to start off with and my boyfriend order the ceviche. The lobster bisque tasted like it was scorched. I did not return it just placed it to the side. the second lady came back and asked how everything was. We said, "Okay". She asked if I liked the soup and I let her know it had a weird after taste as if it was scorched but that I was okay. She took it back with her and later came back to tell me that she checked with the chief and it wasn't burnt and if I wanted something else. I thought it was actually pretty rude and she seemed to have an attitude about it. I tired to be nice about it but it was burnt and I've cooked enough and ate out enough to know what burnt soup taste like. I personally also would have never said that to a guest as a server but that maybe just me.

In between that time, they had brought out an appetizer of their own which was a seafood soup and I forget what it was paired with. The soup was so good, my boyfriend decided to order a bowl to go. The second lady said they do not have to go containers for soup and when he asked for it for the table she still acted like she didn't want to bring it. Even after coming back a second time to let us know our food was coming and was he sure he wanted the soup. We also ordered a bottle of wine. There were plenty of times that are water and wine glasses were low and actually empty and no one to refill. To the point when we were done with our meal, the second waitress now so the 3 rd person serving us asked if we waited to take the rest of our bottle home. Why did we even have wine left and empty glasses? because the service was horrible. For The prices of the food the service should have been amazing. which really unfortunately make us think it was because we were black. This is the only time and place on the entire island we felt uncomfortable. Those two tables across from us had the same servers and where two old white couples. I was dressed elegantly and my boyfriend in a collared button up. We were polite and respectful and received very disappointing service. We were offered dessert or a taxi. This was also the first place on the island where everywhere that worked there looked very pail and untanned, which to me was kind of odd. It was my 30th and I am happy the rest of the trip and island treated us right. Food was good but honestly over priced, and small portions.

“Hard to find- but worth the visit ”

Aug 6, 2016 - posted by INgrid
Very friendly staff- Bartender was excellent- friendly, knowledgeable and drinks were amazing
Food = well presented and excellent .
Not geared for children
If driving on your- own- difficult to find- take a taxi!!!
Fine dining- if you want to et away from beach- type restaurant
Would definitely come ack